Skip to content
Previous Next
Closing the racial and gender parity gap: 5 trends funders and non-profits must know to maintain charitable giving momentum in 2018 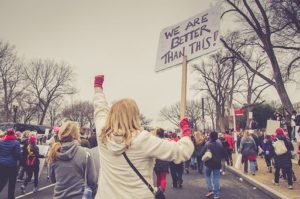 For more than 25 years, I have actively involved in the fight for social justice and equity as a volunteer, funder and consultant. As I look back on what transpired over the past year, 2017 was like no other in my lifetime.

I witnessed an alarming number of polarizing arguments on a broad swath of issues from race to immigration. I was saddened by the countless women who described being victims of sexual harassment. I became more frustrated by reports of Silicon Valley employers that continued to struggle with increasing minority representation in their workforces. Collectively these were stark reminders that progress remains slower than most would hope when it comes to closing the racial and gender parity gap.

At the same time, I was encouraged by the scores of Americans who made the decision to get involved and help defend the rights of marginalized members of their communities as the Trump Administration proposed rolling back discrimination protections. I saw a redoubling of efforts aimed at accelerating the pace of change in form of new alliances to pilot innovative ideas. More importantly, calls for greater transparency resulted in increased accountability when efforts fell short of pledged goals.

While it is easy to become disheartened by impending cuts in government services, we are seeing a positive by-product in the form of increased financial support of non-profit organizations that in some cases are now the only provider of services for those in greatest need. According to Giving USA’s annual study that estimates American charitable giving, charities received $390 billion from U.S. donors in 2016, a historic increase for the third year in a row. In fact, for only the sixth time in 40 years, all nine major philanthropy subsectors realized giving increases with the greatest gains in religion (32%), education (15%), and human services (12%).

Even though it may be months before we have final numbers for 2017, there are strong indicators that events like Charlottesville and the flood of sexual harassment claims will serve to fuel another year of record growth in charitable giving. But, capitalizing on this “perfect storm of opportunity” requires organizations to have an understanding of how current trends impact their 2018 strategies.

Activist philanthropy served as a key driver of growth in some categories: When the Trump administration proposed the immigration travel ban, the reaction was swift with “rage philanthropists” donating $24 million to the ACLU in a single weekend, a sum that grew to $79 million in three months. According to nonprofit evaluator Charity Navigator, during that same period other progressive groups saw huge increases in donations: Southern Poverty Law Center (up 1,400%) and Planned Parenthood (up 1,000%).

Stories matter when raising awareness: The flood of sexual harassment claims as the #MeToo movement grew is a testament to the impact personal stories have on garnering broad support for a specific issue. While there will always be a debate about what’s necessary to address a particular need, hearing someone share in their own words how an event impacted their lives speaks volumes when it comes to galvanizing support and securing donations.

Donors took greater control by giving “their way”: Over the last few years, the number of giving circles – groups ranging in size from fewer than 10 to more than 1,000 members pool their charitable dollars to make grants to nonprofits together – has tripled. In fact, according to the Collective Giving Research Group, giving circles have donated $1.29 billion and engaged more than 150,000 donors. It is worth noting that four out of five giving circles focus their attention on local causes — highlighting human services, women and girls, and education.

Impact investing is on the rise: With so much at stake, stakeholders are facing increasing pressure to accelerate the pace of change by allocating resources to efforts that will pay bigger returns sooner. This includes shifting investments to fund social businesses that have the potential to pay bigger returns sooner as well as in public private partnerships. A great example is the Ford Foundation which has earmarked up to $1 billion over the next ten years to mission-related investments.

Employers are heeding the call for increased community engagement: According to a Fortune magazine poll, “nearly two-thirds of people between the ages of 18 and 34 were at least somewhat more likely to want to work for a company that gave to charity than one did that not.” Which is why Uber has created a citizenship initiative that requires all staff to set citizenship goals aligned with their personal values. This allows them to fulfill their need to contribute to the greater good because they understand that staff needs “to see and feel the commitment to the community and know that their collective effort spans beyond the product to authentic philanthropy.”

For leadership teams seeking to maintain momentum in 2018, here are some key takeaways to keep in mind as you finalize your tactical plans:

• Non-profits that are utilizing communications vehicles capable of reaching donors instantaneously will be more likely to realize greater returns from fundraising efforts.
• Do not assume stakeholders know why they should care about supporting an issue – messaging that resonates with everyone will help attract the most mindshare.
• Funders are increasingly focused on investing in programs that can deliver measurable results so rely on sound data when selling an idea.
• Staying relevant to donors means paying attention to how and in what ways they want to support a cause.
• Organizations that invest in talent with proven experience working in and adapting to a wide range of environments will have the operational agility to modify fundraising strategies should marketplace shifts occur.